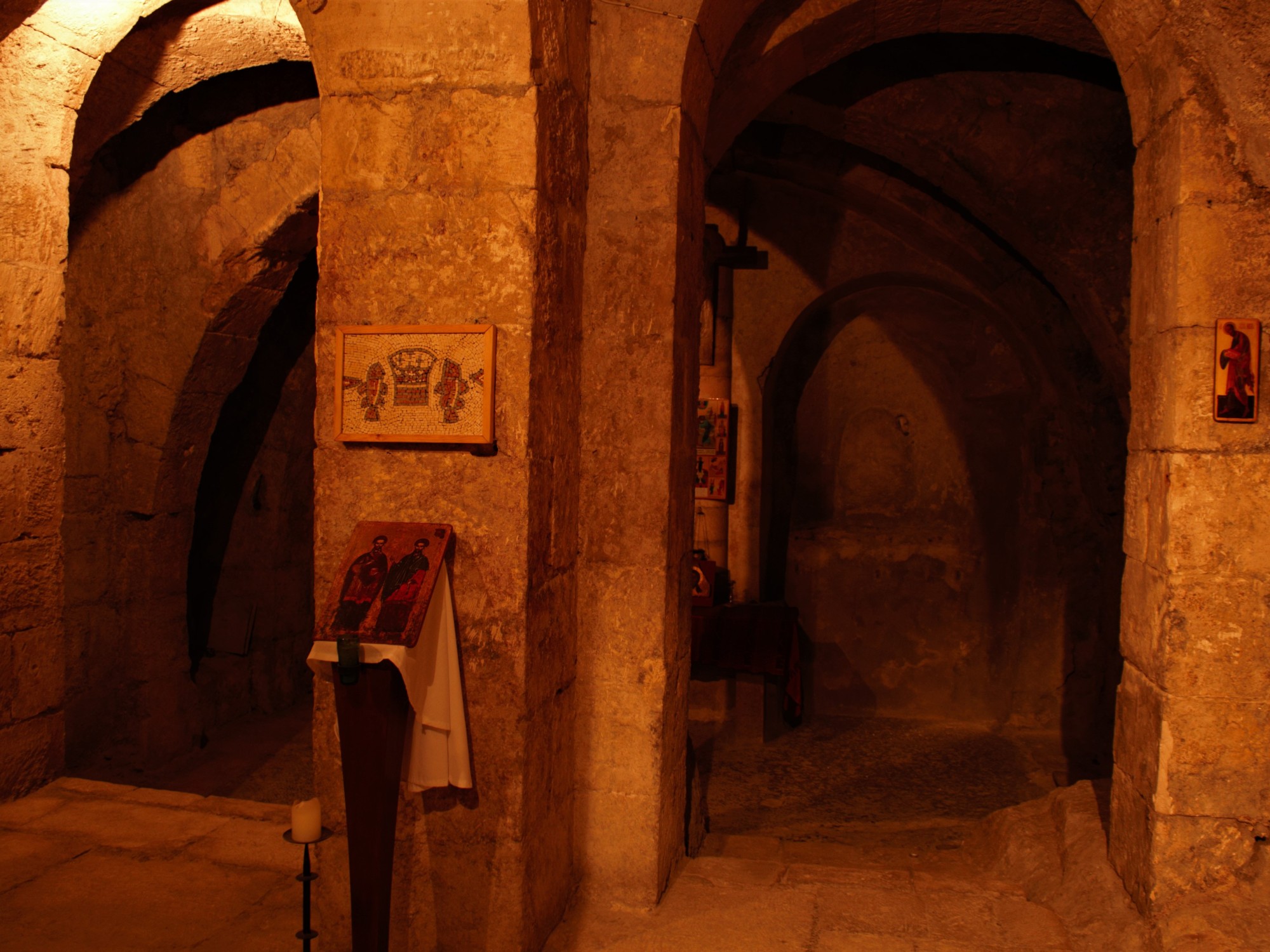 The black minivan held a family of smiles as it sped along the open freeway, the ocean scenery blending into rocky undulating hills as we left the coast and headed inland toward Jerusalem. Passing Tel Aviv and its airport – our arrival point – we reminisced over the vast orange groves seemingly out of place in such a dry land, road signs in Hebrew and Arabic flew past eyes which then excitedly caught a glimpse of English – Jerusalem was ahead and we were on the right road.

Bec and Lily mentioned they were interested in the Old City of Jerusalem and we all agreed that to be our destination. Michael Buble played through the car speakers telling us the best was yet to come as we followed the sporadic ‘Old City’ road signs through the ‘New City’. We arrived, found a park and stretched our legs.

From the elevator we broke with excitement to come to an avenue of expensive shops, clothing, jewellery, a café full of people – this introduction to Old Jerusalem not my vision of the religious landmark that I confessed to have zero clue about. After a flight of steps away from the commercial chaos we came to a towering affront of yellow rock, we stood at the gate of the city as other tourists came and went, the wall, stories high went all around the vast city which once secured it from marauders.

We stood and gathered once we breached the gate, the family collecting wit toward the impending tourist chaos of a major attraction. A food vendor offered us local delights to be devoured and we each took a morsel to satisfy before choosing the downhill path toward the heart of the city.

The alley was small but busy, not wider than two abreast we stepped carefully on the slippery cobble stones marvelling at the myriad of wares on offer in the tight thoroughfare. Colours everywhere caught the eye, intricate Hebrew and Arabic designs, seas of wooden carvings, soft fabrics – elaborately woven cashmere hung on almost every shopfront giving the normally bare metal and stone a temple impression.

The reality not the same as we negotiated our way in human flow to where we knew not, catching the eye of a vendor gave licence to sell, everything displayed bought some attraction and we found ourselves stopping regularly to marvel – we reminded ourselves of luggage space and kept moving, we would walk but a few metres to encounter another store with identical wares – beautiful tourist junk, yet I found myself wanting most of it.

The alleys were tight, some parts of the city were completely enclosed from the day and we discovered the difficulty of navigation, even with a map we were completely lost from direction. None the less direction was not really in mind as we followed our feet through the endless gauntlet of material offerings. Heath took a sharp right into an unmarked masonry door arch, it opened into a low ceiling room with two nuns seated at the rear, handmade cards and paintings lined the wall and through another door led steps downward into darkness – we took them.

A lone candle lit a wooden cross on the thick stone wall of the cavern, one of the group took it off the wall to look around, its warm light inadequately splashed the grotto as it was carefully carried from room to room – a lit hand protecting it from the slightest breeze – the rest of us followed the hovering flame as moths would the same and crept onward. We came to a halt at a spiked iron fence, this was where we could go no further, our candle’s warm aura unable to penetrate the pervading darkness – curiosity kindled, the walls now metres apart fading from orange to black and the black of nothingness in between. I wondered – could this lead to secret underground catacombs? And my imagination took me on a ride of mystery likened to an Indiana Jones scene. 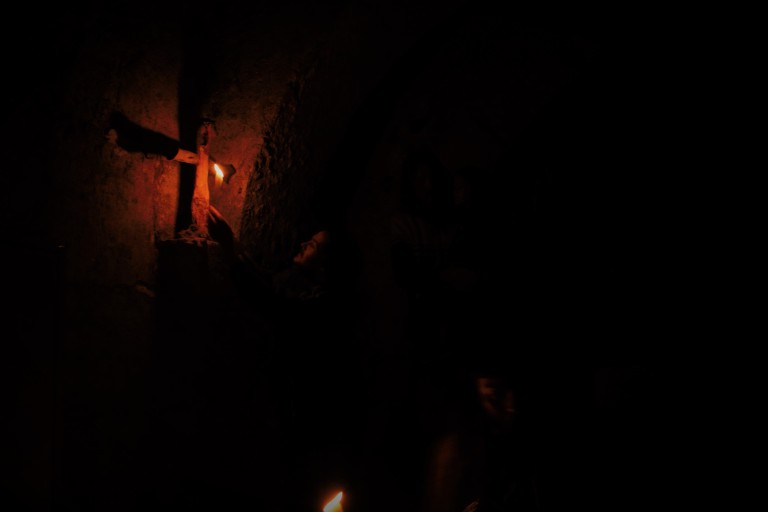 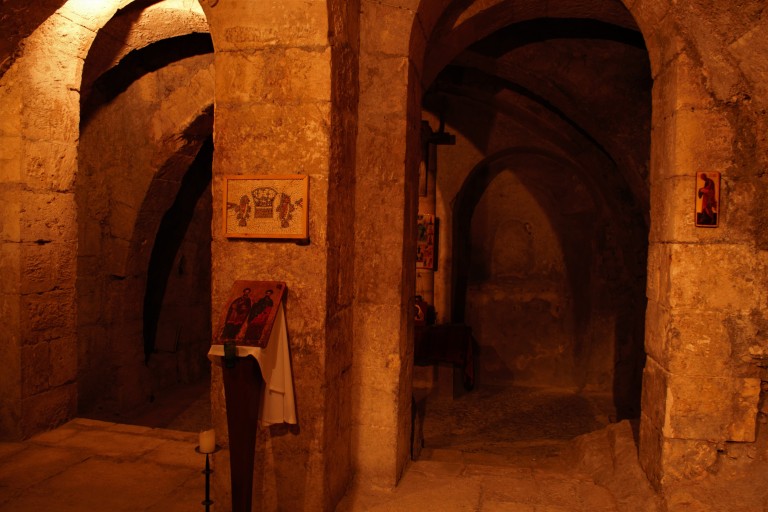 A few words spoken in Hebrew from the entrance bought me back to reality, no time elapsed before light and colour washed my sight, the candle paled by electric light and the once darkened stone now fully illuminated. The void beyond the iron bars a mere room and exciting fantasy quelled by the harsh light of reality. We thanked the nun standing in the doorway and made exit.

The cobbled street opened up and light poured in painting the walls in white, the dark alley transformed to a bright crossroad, tables and chairs spotted the edges as waiters tiptoed around them carrying silver trays of steaming food and drink. We stood back and took in the view – hats covering curls, heavy coats over white shirts, long black robes, long white robes all broken by the colourful curiosity of a lost tourist streamed to and fro across the courtyard. A guide – read shepherd – took his bustling flock of learned visitors forth speaking in practiced tones the story of the city.

A group sprinkled with cries went by slowly, stopping every dozen paces, a wooden cross poking from the centre – Lily exclaimed they were following the stations of the cross, where the man Jesus trudged, a crown of thorns and burden of lumber. From the alley we came vendors sold dozens of these painful headdresses among his other mass produced wares. We slowly followed the precession until coming to another pretty store, a beautiful macaw sat perched without tether on the back of a chair, adorned with feathers that turned heads with striking hues. I came close and gave the bird a tickle, it responded by latching on to my finger with its powerful beak, the owner gave a quiet chuckle and attended to his drinks fridge and after my hand was freed I admired the colourful creature out of biting range. 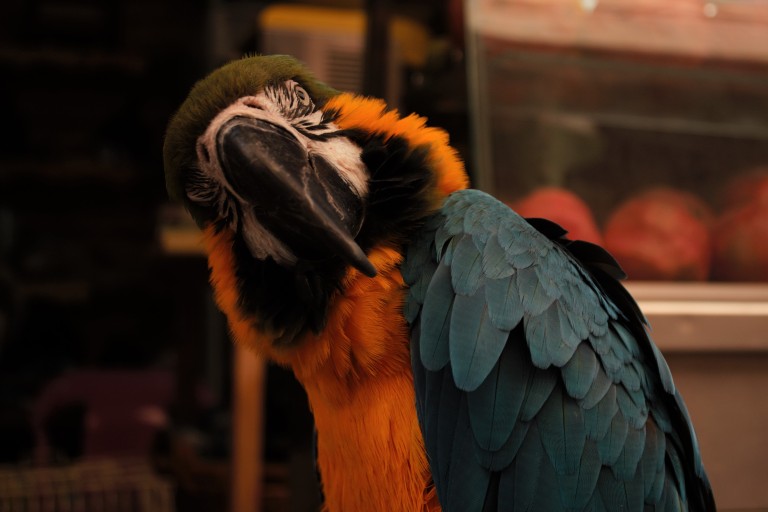 The sun was going down and we needed to find a place to see it, for most of the journey the family had been sun gazing – looking directly at the sun during its final descent and softest intensity. We needed a western facing vantage point and discussed options. By this time some of the group had already split looking for their own separate vantage point, of those that were left – David, Marty and I – checked our Old Jerusalem map and decided on Mount Of Olives, we paced out the Lions Gate – one of the main thoroughfares to the city – and headed to the Mount.

The colour of the day was changing, the trio scanned the hill for a shortcut up and saw a field of white stone. Getting closer we saw it as a cemetery, its monuments stretching vast distance on the mount, we cut through and up marvelling at Hebrew tributes etched into the smooth local cut rock. As we ascended the burial metropolis we looked over our shoulder to see the city wall, the giant rampart blocking the sun and murder holes that glowed with golden light – further we climbed. 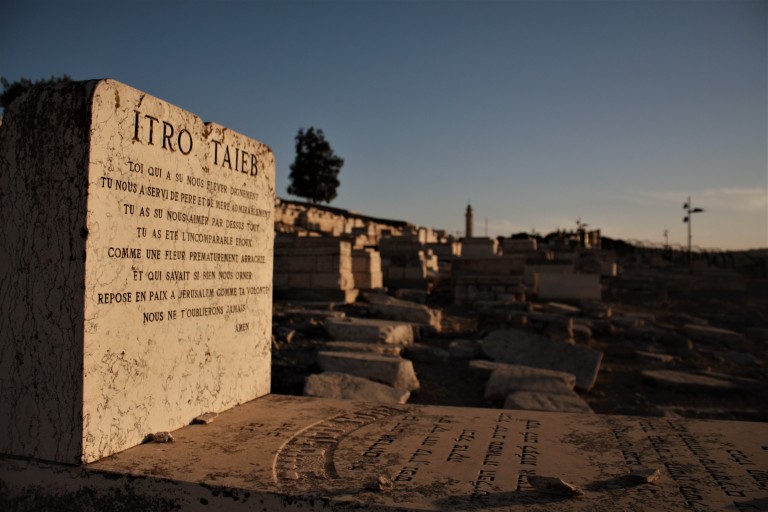 We breached the highpoint of the cemetery and came to a carpark, above us was a lookout and to our delight the waving hands of our friends, all reunited we contemplated the golden light as it pervaded our bodies and shone through the dusty Israeli hills. 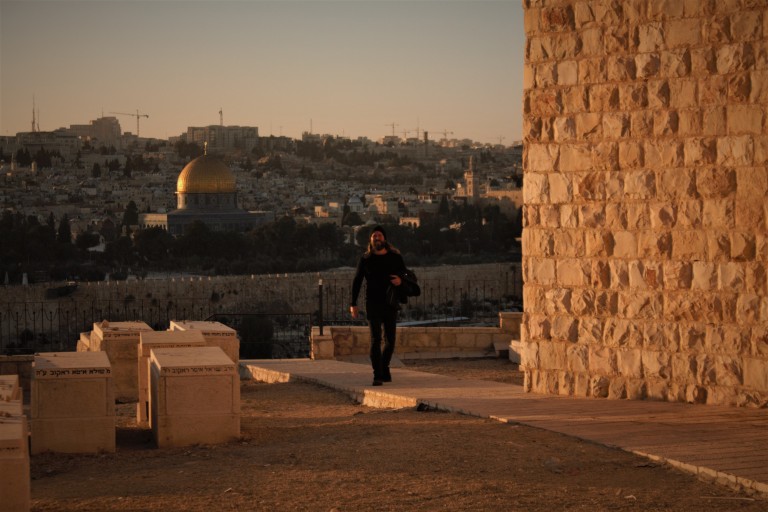 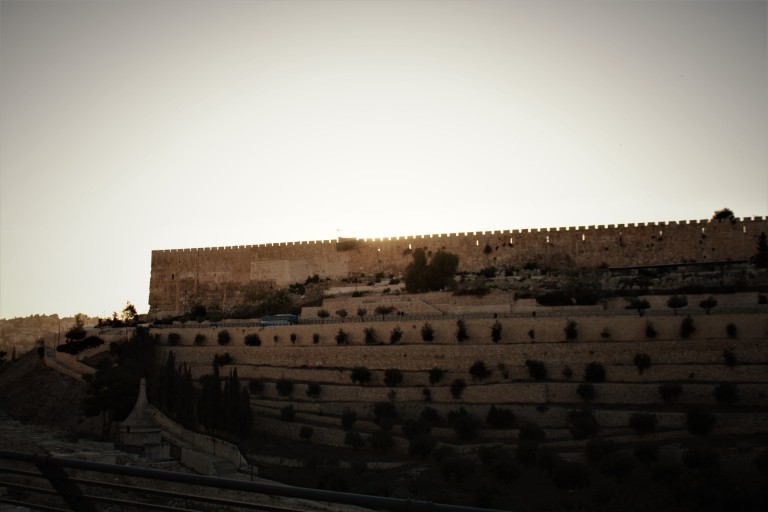 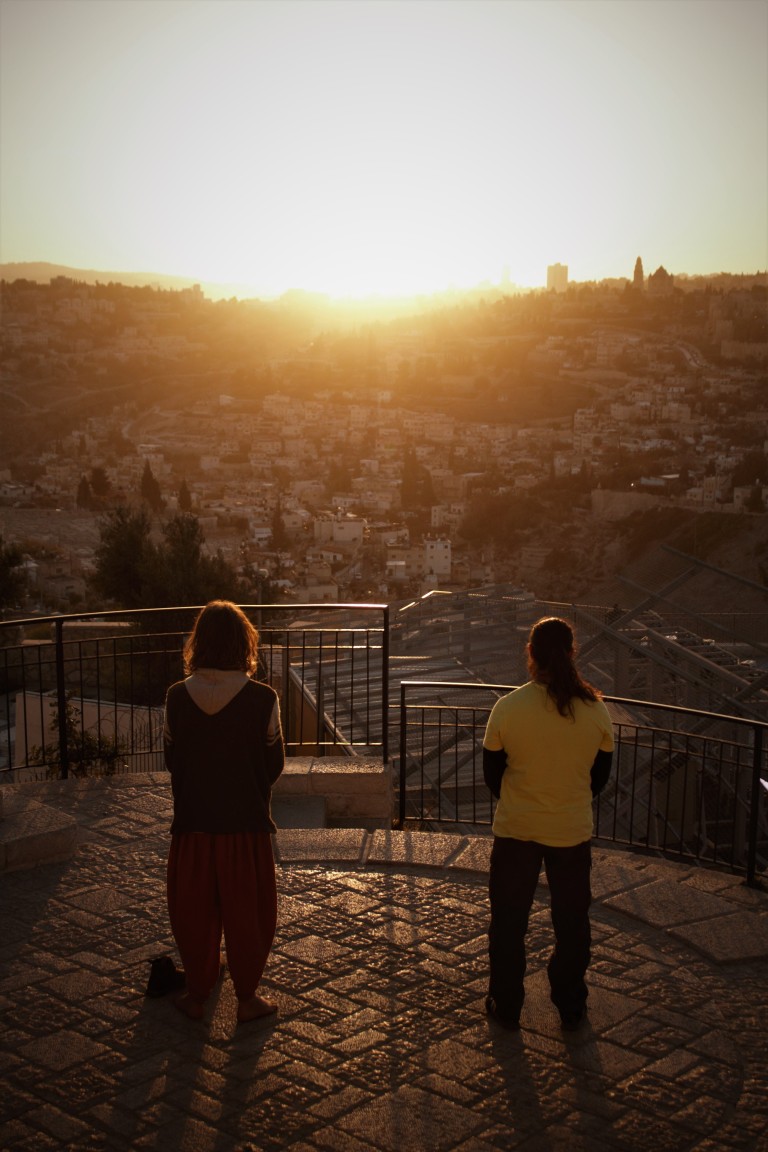