It was late in the day when I arrived, the road turned from asphalt to graded clay and the corrosive snake of doubt began to creep in, I was more open to it this time as I was exhausted from the weekend of wine and social action. Where was this place I had spent a whole 5 minutes researching? I gave up on the map and thought ‘Fuck it, just do what works for you and pick whatever you’re driven to’, and the letting go took me not only to this place but to a more relaxed state. Not trying to get anywhere is a much nicer way to travel.

Turton’s Creek the sign said, I pulled in and found a nice open campground deep within a lush valley of pine, eucalypt, and beautiful green fernery – it was also rather wet here. I stopped near a creek and roughly set up in the fading light, when dark fell I was ready for sleep. The next day I rose and got a fire going, the burnable wood had all been scavenged and I had to walk far to bring decent fuel back, I would say that this gets fairly populated during the weekend, good thing it’s Tuesday.

When the sun finally reached its gaze above the wooded giants I saw that my chosen area was not to receive any of it and that I would have to move the van if I wanted to be dry and powered. I gave that to the day’s plan as I went to exploring the area, my boots tromped through a thick pine forest and came out upon a beautiful pathway, littered with giant red fungi and enclosed by ferns arching over the trail, such a beautiful place and it seems that this is an area used by dirt bikes, good thing it’s Tuesday.  When I finally returned to the van I relocated and received the benefit of the afternoon sun, so warm that I spent the rest of the day basking and reading.

The next day was Wednesday, in place of the sun were thick white clouds, releasing vapour just heavy enough to float down to earth, but oh so continuously, and this resulted in very waterlogged ground – I lounged around inside the van for most of the day until I was inspired to go for another walk. This journey led me along a winding path, contrasted by thick green ground covering vines and overshadowed by giant ferns. I could hear the creek bubbling some metres beside me and ten minutes upstream it led to a beautiful waterfall, flowing over naturally square rock, the crystal clear water only a few centimetres above stone as it ran on toward a sharp cliff.

The walk continued for most of the afternoon – I found an apple tree and filled my jacket pockets with the delicious bounty – I took a forestry road and began a steep climb surrounded by majestic pines, all the while the distinct Amanita Muscaria mushrooms loudly breaking up the grey/brown of the forest floor. A narrow path was cleared through the trees and took me to the top of a farmer’s paddock overlooking the valley, I sat on the gate and lovingly surveyed over the beautiful scenery.

It is Thursday now and I have packed camp destined for dry circumstances, perhaps a caravan park for the night, work prospects have been delayed until the 4th of March which means I have an extra week to explore southern Victoria. 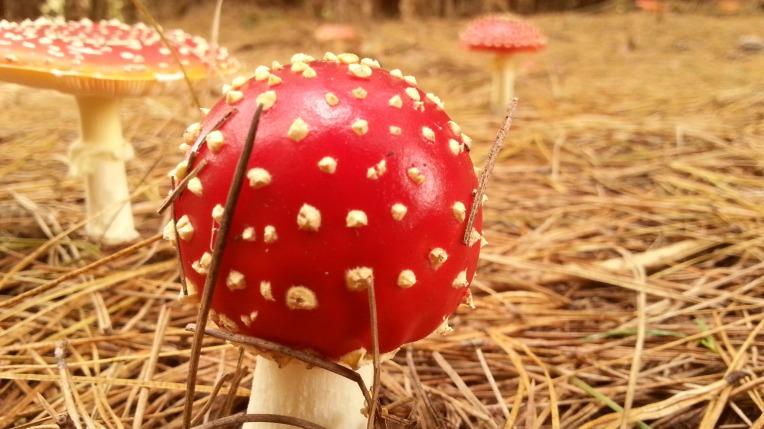